View source
watch 01:36
We're Getting Mutants in the MCU - The Loop
Do you like this video?
Play Sound

“Do you believe in Gravity?”

Part 6 of JoJo's Bizarre Adventure, subtitled Stone Ocean, is preceded by Golden Wind and followed by Steel Ball Run. Jolyne Cujoh is the JoJo for this part, and Enrico Pucci is the main antagonist. Pucci's Agents and DIO's sons are this part's villainous factions.

This is the final part set in the original continuity, cutting the thread of fate that binds the Joestars and DIO. Part 7 begins within a new series that is not connected to the first six parts.

Stone Ocean is currently being adapted into a TV anime as the fifth season of JoJo's Bizarre Adventure: The Animation. The first chapter, consisting of 12 episodes, premiered exclusively on Netflix on December 1st, 2021. Chapter 2 is set to release on September 1st, 2022.

Florida, U.S.A, 2011 -- After an accident while on a drive with her sweetheart, Jolyne Cujoh falls into a trap and is sentenced to fifteen years at the state-run maximum-security correctional facility Green Dolphin Street Prison—AKA "the Aquarium." On the verge of despair, she receives a pendant from her father that causes a mysterious power to awaken inside of her. "There are things in this world that are more terrifying than death, and what's happening in this prison is definitely one of them." A message from a mysterious boy who appears before Jolyne, inexplicable events that occur one after another, the horrifying truth told to her by her father when he comes to visit, and the name DIO… Will Jolyne ultimately be set free from this stone ocean they call a prison? The final battle to end the century-long, fateful confrontations between the Joestar family and DIO begins!!

In Florida in 2011, follows Jotaro Kujo's daughter Jolyne Cujoh after she is sent to prison for a crime she did not commit. While learning about the bizarre rules and prisoners in the Green Dolphin Street Prison, Jolyne discovers the evil plot perpetrated by Enrico Pucci to steal her father's memory, and read the contents of a diary left behind by DIO, which tell of a way to reach "Heaven" and let Pucci be able to change fate. Jolyne is accompanied by Ermes Costello, Emporio Alniño, Foo Fighters, Narciso Anasui, and Weather Report, as they attempt to save Jotaro and stop Pucci. The story ends with five of them, including Jotaro, being killed by Pucci, as his plans come to fruition and the universe is reset. He is ultimately defeated by Emporio, which causes the universe to be reset again, creating a new world untouched by Pucci's influence, ending the curse of the Joestar bloodline for good. 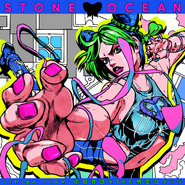 A one-shot manga chapter written by Araki starring Jolyne and a few Part 5 characters in collaboration with the Gucci clothing brand. It is non-canon, as it features the likes of Jolyne included with Part 5 characters who could never meet otherwise. Also considering that Araki's other brand deal featured manga also is non-canon, it's safe to say this one is as well.

This spin-off received an official English translation in January 2013.

A light-novel written by Niso Isin in 2011 that's meant to be the lost transcript of DIO's diary featured in Part 6. It also includes explanations for many of the obscure parts of Dio's plan and his life, including his backstory with his mother, his thoughts and feelings during the events of Phantom Blood and Stardust Crusaders, and explanations for why he needed 36 sinners to sacrifice for the Heaven plan, and how he came up with the idea of "Heaven" in the first place.

It also gives an explanation as to how DIO survived in the coffin between the events of Parts 1 and 3. In this novel, it is explained that Erina saved DIO out of the goodness of her heart and placed herself in the coffin with him. This contradicts canon, as in Part 3 it is shown that DIO survived through a hidden compartment at the bottom of the coffin.

A one-shot featuring Jolyne written by Sho Aimoto, author of the series Kemono Jihen. It takes place during the events of Part 6, presumably before the events of the Savage Garden arc, where Jolyne meets a mysterious prisoner who makes continuous tearful requests for someone to draw her. It released in December 2021.

The story is 26 pages and tells the story of a Stand User that Whitesnake created in the prison named Fujiko Fujiyama. Whitesnake gives her the Stand Bad Romance, which she uses to control Jolyne's emotions using her drawings. The plan backfires however, because Fujiko becomes infatuated with Jolyne, and her ability to dehabilitate her ends up helping her. In the end Fujiko's memories and Stand are taken by Whitesnake and it's made as though she never existed.

Community content is available under CC-BY-SA unless otherwise noted.
Advertisement